Training for Roma Youth Leaders on Advocacy and Peer Education 2013

Training for Roma Youth Leaders on Advocacy and Peer Education 2013 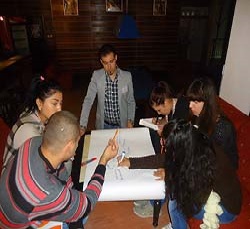 Each year PETRI-Sofia organizes different regional trainings for members of the Y-PEER network and other young people from Eastern Europe and Central Asia.

The Training for Roma Youth Leaders on Advocacy and Peer Education took place between the 23rd and 30th of September in Borovetz, Bulgaria with participants from Bulgaria, Bosnia and Herzegovina, Kosovo, Macedonia, Romania and Serbia between the ages of 19 and 27.

The training was separated in two modules, three days each. First, the participants learned about advocacy with the trainer Teodora Krumova, deputy chairman of Center for Interethnic Dialogue and Tolerance “Amalipe”, Bulgaria. Amalipe is a leading Roma-focused organization, which works more than 10 years on the problems of Roma integration in Bulgaria. Theodora Krumova has tremendous experience as a trainer in the field of Roma culture, history and traditions and the Roma community’s problems. Her topic – “Advocacy” was extremely useful for the participants because they not only had the chance to learn the theory, but to put the new knowledge to practice. During the module the participants were separated in two groups by countries and developed a plan for the implementation of two different advocacy campaigns. The first group’s focus was on the need of Roma women to visit a gynecologist more often, and the second one worked on the inclusion of “Roma culture and traditions” in training curricula, which the Regional Health Authorities would implement in sessions with students of diverse schools. Both campaigns aim to raise awareness on the topic of Roma health.

The second module, “Peer Education” was delivered by the trainers Marija Atanasovsa, a trainer from Y-PEER Macedonia, and Silviya Vassileva, deputy chairman and program coordinator in “Health and social development” Foundation. Siviya Vassileva works for one of the components of Bulgaria’s National Programme “Prevention and Control of HIV/AIDS” under the supervision of the Ministry of Health and has broad experience with field work. As the group was diverse enough to include young people, who have no prior information on the subject, with the help of the more knowledgeable the trainers managed to present the needed information amazingly. The most interesting for the participants were the interactive role-plays, as they gave an alternative method to spread information and help in it’s assimilation. Another interesting part of the training contained the basics and methodology for facilitating peer education trainings – how should a trainer be dressed, which gestures are appropriate, how to pick the right language and how to co-facilitate.

Although the activities war officially planned only for the day, the participants found a way to make use of their free time. In one of the evenings, a evening for the country’s cultures was organized, where each nationality presented a video, explained briefly about the characteristics of the culture and showcased part of the specific cuisine. During the rests of the evenings the participants gathered together and took part in different games, and, of course, dancing was always part of the festivities! The time after the sessions brought the participants together, which helped greatly the whole process.